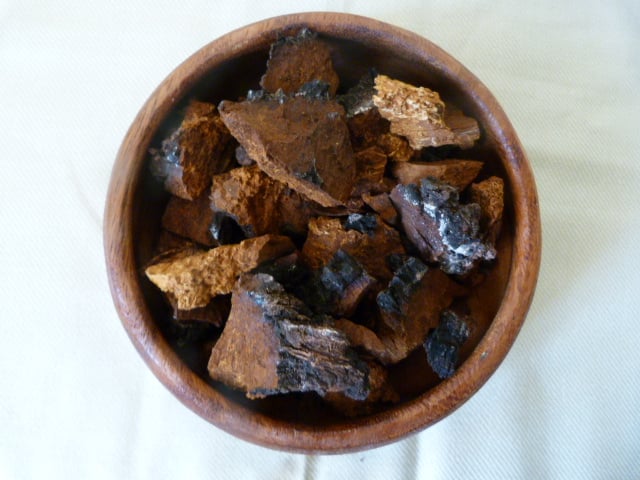 I forage for chaga in the northern birch forests of Scotland where it is to be found in this country.

It is very rare and i only harvest a little at a time and always leave some on the tree, so as to make sure it will continue growing as it has a long and slow growth cycle.

It has been used for thousands of years in Chinese Medicine and also Siberian folk medicine and highly reverred.

I don't have the space here to list all the properties of this potent gift from nature which is known as 'King of the Mushrooms.'

If you're already familar with Chaga then you'll know.

For those of you who would like to find out more details then there's plenty of information online.

Your chaga will come in small chunks and/or rough powder.

Just to emphasise, that the most potent way of obtaining the complex compounds which are beneficial for supporting our immune system, is to make a tincture from the dried Chaga that i'm offering here.

It's really straightforward to do at home and there are a few videos on youtube which takes you through the process.

Bear in mind that you have to soak the dried chaga in vodka for at least 6 weeks to extract the compounds.

You can make a simple tea from the dried chaga, but it isn't as potent as tincture...

Once you've made the tea though, you can then soak the chaga in vodka for 6 weeks so as to extract the compounds which aren't extracted in the tea making process.

So i'd say... Prepare for the winter months and begin making your tincture as soon as possible.

Instructions for brewing will be on the bag. It's really straightforward and the 100 grams of chaga will make many litres of tea.